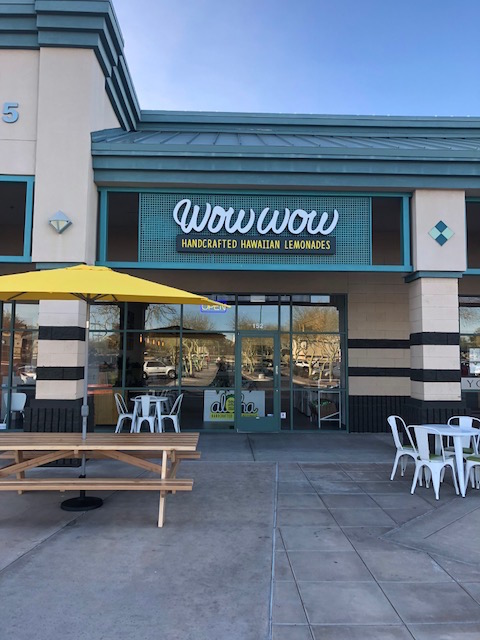 Wow Wow Hawaiian Lemonade is riding a wave of expansion after recently moving its home base from Hawaii to Arizona. With four franchise locations already open and operating throughout the Phoenix area, the company has announced plans to open more than 18 additional locations through strategic franchise partnerships in the next 18 months. The new franchise locations will create approximately 200 new jobs.

In 2012, Wow Wow was founded as a farmer’s market stand in Hawaii. Customers had one sip of the fresh, all-natural lemonade and exclaimed, “wow,” followed by another “wow” after the second sip — giving the concept its name. After growing in popularity with locals and tourists, the lemonade stand transitioned to a brick-and-mortar restaurant in 2014 and began offering locally-sourced, handcrafted, healthy food options like super-food acai bowls, avocado toasts and overnight oats. Since day one, Wow Wow has also been fervently committed to sustainability. Guests can order their lemonades or smoothies in a re-usable Mason jar and receive a discount on their next purchase if they bring the Mason jar back to reuse.

“With its 350 days of sunshine a year, Arizona is the quintessential market for expansion for Wow Wow Hawaiian Lemonades,” said Weiderhoft. “Plus, just last year lemonade was named the Official Drink of Arizona! We are proud to grow in our home state and offer Arizonians the opportunity to grow a business with unlimited potential.”

Already working toward the goal of introducing 18 new locations in the next 18 months, there are currently five locations in different stages of the development, with Wow Wows opening in Lake Pleasant, Surprise, Moon Valley, Gilbert and Peoria by year’s end. The upcoming Lake Pleasant eatery will be situated at 24775 N Lake Pleasant Parkway Suite 101, Peoria 85383 and is slated to open in early spring Wow Wow is looking for franchisees with a head for business, an interest in healthy eating, and a value for community.